New month, new update! A lot has happened so this will be a bit longer than most other updates. Let’s get started right away!

We wanted to thank everyone again for all the support- especially the Early Access Beta Knights who have forfeited their time and energy to play The Lighthouse Prologue while it’s still in Beta. We know everyone’s time is valuable and we will do our best to make sure we iron out bugs, implement handy features, and apply as much feedback as we can to improve the core experience/usability of the game. We have been making UI updates, accessibility updates, polish updates, bug fixes, and software/hardware updates so that the game can run on more computers. Here’s a detailed explanation on what we’ve been doing this month:

A great game is a sum of all its parts. Just because something works, doesn’t mean it’s enjoyable to interact with. During Beta, we started to really see some problems that can break immersion and/or frustrate players and our number 1 goal is to make sure The Lighthouse is actually enjoyable to play. All of the updates below have been added into the game to improve the user experience.

Our original pass on the inventory system was to make it as simple as possible using re-bindable hot keys (‘F’ on the Keyboard ‘X’ on the Gamepad) to navigate the inventory. You can watch our original Developer Diary here where Laylee explains the “Snap” system. Keeping things simple is fundamental to a small team like ours for many obvious reasons. With the “Snap” system you simply:

This maneuver was super fast! But after watching gamers/developers from just about every background play The Lighthouse (Beta Knights and Industry folks at GDC), it became obvious that this was not an intuitive way for players to navigate the inventory. Most players were confused on how to move around and craft items which is pivotal to our puzzles. Indie games are well received when you successfully cater to your audience. Our audience is you. And so, we decided that we needed to spend some time this month to revamp the inventory system to make it more user friendly. It’s funny because we all felt very strongly about keeping things simple, and yet, after we did another pass on the system- we realized it was significantly better in just about every metric. Check it out here: 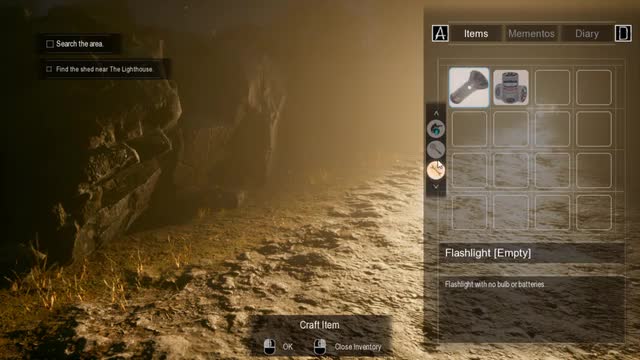 You may have noticed some objectives in the Top Left corner of the screen. That is a new feature we built from the ground up to address a major question- “What do I do now?” The answer has always been “figure it out.” Clearly, if you’re buying a game that has puzzles in it, you want to be given the courtesy of solving them without the game holding your hand every second with pop ups and toast messages. We firmly believe you should explore and experiment so that you can feel the sensation of accomplishment. After all, the original Lighthouse game we built at a 2014 game jam was a point and click adventurer somewhat similar to Monkey Island or Myst.

We will attempt to explain why the “figure it out” approach can be bad.

As you build a game, especially a game with light based puzzles and obstacles like you’ll find in The Lighthouse, things appear obvious to us because we were the ones designing them. Once you get it into the hands of people who have never played a game like yours, you’ll soon find that things were either not obvious or borderline impossible to figure out without some kind of hint/help. Great game design should mitigate confusion so that the player understands the basic rules and is able to overcome challenges intuitively.  We use lighting and environmental design to guide you in the right direction, but this isn't enough.

There is no such thing as the perfect game (debatable), and there is no such thing as perfect game design. While we’ve been building The Lighthouse, we’ve loosely used the “x3 method/Power of 3/Rule of 3.” To explain it simply, you tell/show/have the player execute something so that they fully understand the rules of the game or the direction you should go. To explain, let’s use an example of Irvine’s Office in the Prologue and the fallen candle.

Henry talks to Irvine on the phone and he explains that James needs to bring a candle. 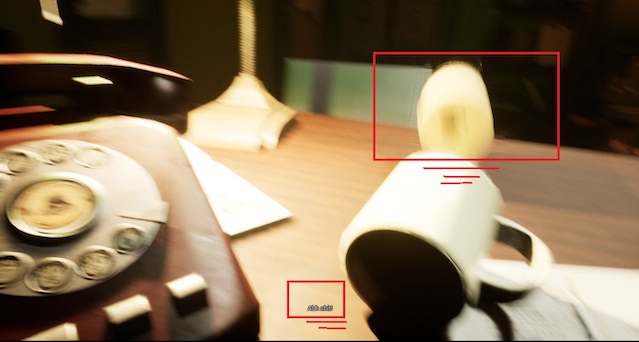 James knocks it down showing that it fell on the floor and he needs to pick it up.

James falls down and looks at where the candle fell.

Now, using the “x3” system, it seems pretty clear where the candle is, and where to go next. But, what about the players who didn’t catch any of that? Do you let them wander around aimlessly with no idea what to do next? What’s to stop them from getting frustrated and turning off the game entirely? Not good. For something like this, you need another system, and that’s the Objective System.

The Objective System appears in two handy locations for the player: 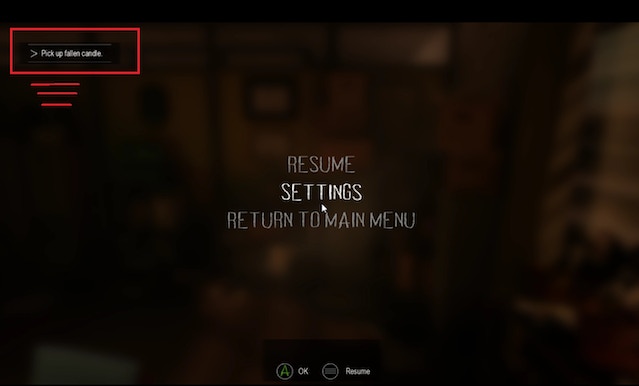 Objectives will be shown in the top left corner of your screen. This is the objective system within the pause menu.

It updates with the game in real time to let you know what you should do next. If that isn’t clear enough, there's a HINT category just below the Objective System. You can turn HINTS on/off at any time during the game through the Accessibility Menu (They are DISABLED by default). Best of all, no achievements or tracking system is used for HINTS so feel free to use them whenever you need them without being penalized. 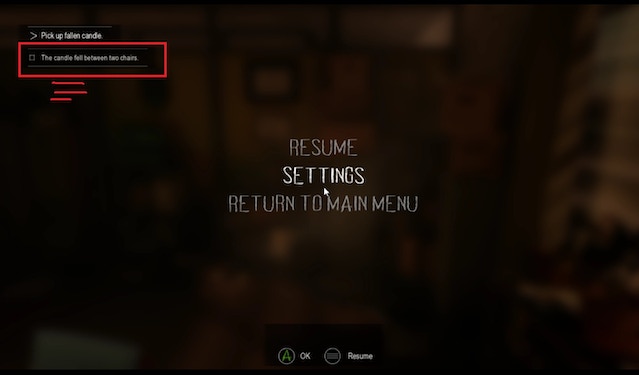 Hints will be shown right below your objective.

Above the controls, you can now see what you can do while you are navigating the menus and inventory system. A handy message will display itself so that it’s clear what can be attempted at any given moment. This is very useful because it relieves the team from having to make an in game tutorial system and the added information really benefits the player. 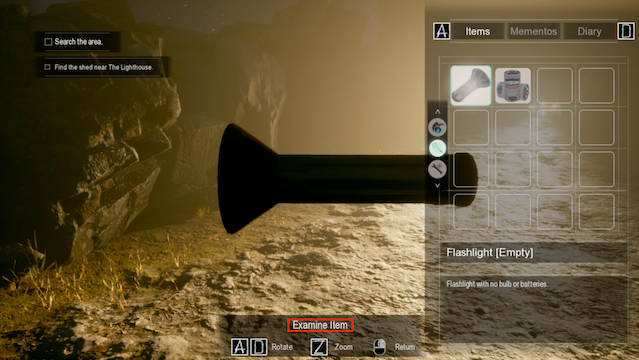 Our audio and visual overhauls help players understand cues. The Lighthouse game takes place in the 1960s so a lot of emphasis has been in the type of feedback the player hears/feels when clicking on buttons and switches. We’ve gone for a more analog route and the results are very satisfying. Buttons and Items animate with the same tactile feel as they would an old switch board. Simplifying the menu and streamlining the look really lets the player enjoy the background visuals without the menu overpowering the screen. And, finally, since we are building a video game, it should be fun to interact with all objects, especially the menu. 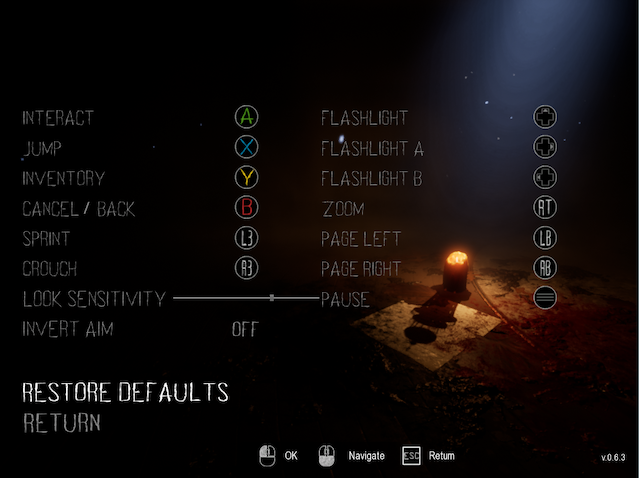 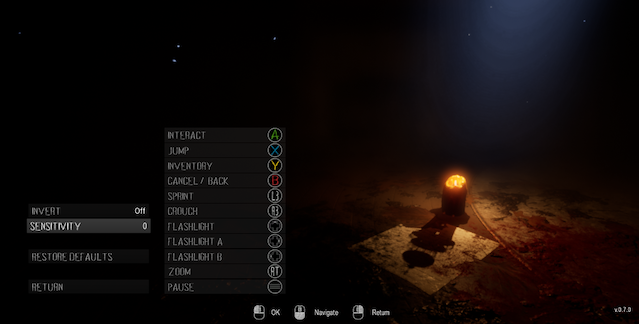 Last month we received the physical soundtracks and Mimi has finished personally signing each one. We’re waiting on the Art Books and posters before we start mailing these out, so we can save on shipping costs. But we’re hoping to receive those soon as well.

We still have some soundtracks left, If you still want to add the soundtrack to your pledge, you can do that here -

[Be aware that Act 01 has tons of spoilers and many permanent gameplay sequences.]

Please remember that beta testing is only for those of you that are in an early access tier.  If you weren’t part of the original Beta Test and would like to participate now, please sign up here

Be sure to follow us on our social media pages for the latest news and development updates!

If you haven’t added The Lighthouse to your Steam Wishlist, you can do that here

We have some more news to share hopefully this week. Stay tuned for another update. :D